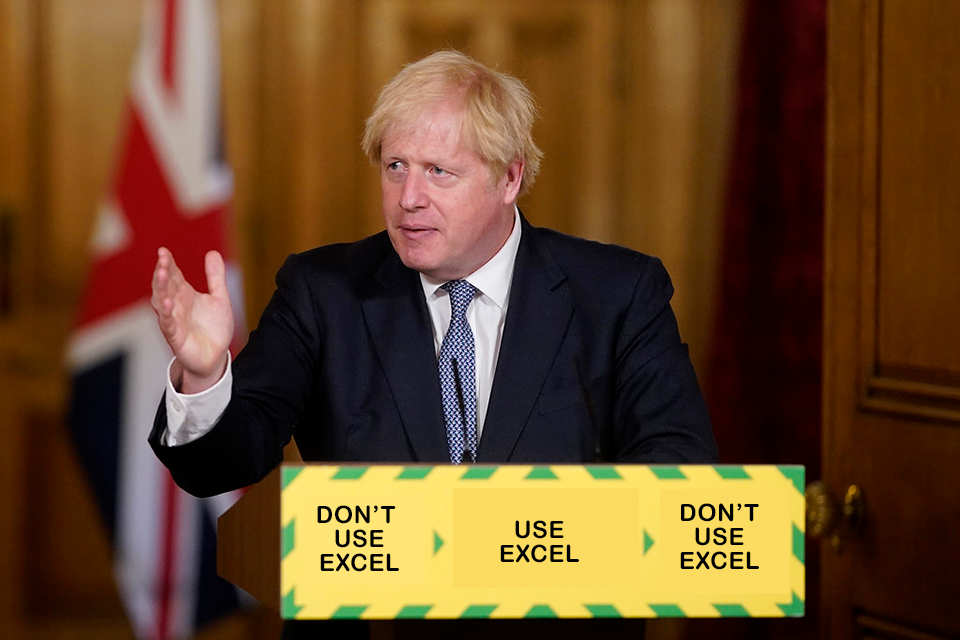 Nearly 16,000 UK COVID infection cases recently went ‘missing’ due to a “technical error with an Excel spreadsheet”.  Not only were these cases missed from the statistics - but also from the important contact-tracing efforts led by the outsourced NHS Test & Trace.

The huge mistake here, was the decision to use Excel for something as vital as reporting COVID figures in the first place.

Excel is great for things like quick calculations, shopping lists, currency conversions, and exploring tabular data.  Excel is everywhere and being one of the most-commonly used business tools, its ubiquity is part of its appeal, as is the ability for it to handle common data-exchange formats such as CSVs.

But here are 10 reasons why you shouldn’t be using it in life-or-death situations - nor should you for running your business operations.

1. Excel doesn’t scale well for large datasets - In Public Health England’s recent case, one lab had sent in its daily test report into the lab as a CSV file which were then combined with other CSVs.  CSV is just a tabular data-format list readable by many programs and capable of having any size, but Microsoft Excel files can only be 1,048,576 rows long. So when a CSV file longer than that is opened, the bottom rows get cut off. Which meant, in PHE’s case, after the lab had performed more than a million tests the data started getting cut off.

2. Excel is old. Excel was released in 1987 when Bon Jovi, Madonna, The Bangles and Duran Duran were in the charts. In software terms it is ancient. We’re generating far more data than when we were back ‘living on a prayer’. The data-demands of the modern world demand a robust, fast, scalable and secure backbone.

3. Mistakes can be very expensive. In 2013, an Excel error at JP Morgan masked the loss of almost $6bn (~£4.6bn), after a cell mistakenly divided by the sum of two interest rates, rather than the average.

4. With spreadsheet software there is no clear audit-trail. So whilst cells are easy to edit, they are also incredibly easy to miss-type extra numbers, use incorrect formulas and so on. It is human nature to make mistakes, but Excel amplifies errors across your workbooks and your organisation.

5. Excel is messy. A friend of mine works for an energy company (that I won’t name & shame). She’ll often be working into the late hours wrestling with Excel spreadsheets trying to find billable revenue against completed work. The energy company’s ‘missing revenue’ figures are huge, but are forever lost in the depths of various Excel spreadsheets.

6. Excel doesn’t connect to live data in a reliable way. Most people working with data in Excel will be working with historical data, i.e. data that has already gone out of date.

7. Excel is slow. Being desktop-based, Excel uses your PC/laptop’s CPU to perform its calculation, so if you’ve got several formulas running across multiple cells and columns, then you’d better go get a cup of tea, before that monthly report has finished whirring away.

9. Excel is only as secure as the machine you've got it installed on. So if you’re working with sensitive data in an Excel spreadsheet, for example customer/patient’s data, but then accidentally leave your laptop on a train. That data is then at risk of getting into the wrong hands.

10. Excel doesn’t do machine-learning. New technologies such as AI, Machine Learning & Automation can greatly enhance your data environment. But not if you’re still stuck in 1987.

So what's the alternative option?  Well, Stratiam of course!

We believe there are many data-generating tools out there, that are each exceptional at doing a single task very well - but combining their respective signals in tools like Excel isn't workable. For example; SalesForce is a great CRM, LogicMonitor is brilliant at device & network monitoring, Cylance is great for EndPoint protection and so on... Let these tools do what they are exceptional at, but instead pull their respective data signals down into a robust data environment, so you can maintain a single-source-of-truth for key signals that are important to your organisation. Add in version control, so you can continuously improve, automation to keep your data live, a high-quality visualisation layer and so on...

Stratiam has several API connectors allowing you to connect to multiple data-sources, its intelligent data-modelling allows you to cross-correlate different datasets, and it has several pre-built reporting/dashboards each providing you with unique ways to uncover actionable insights from your data.  We can also build custom connectors for anything bespoke that you might be using.

To organise a trial or a demonstration of Stratiam please get in touch.