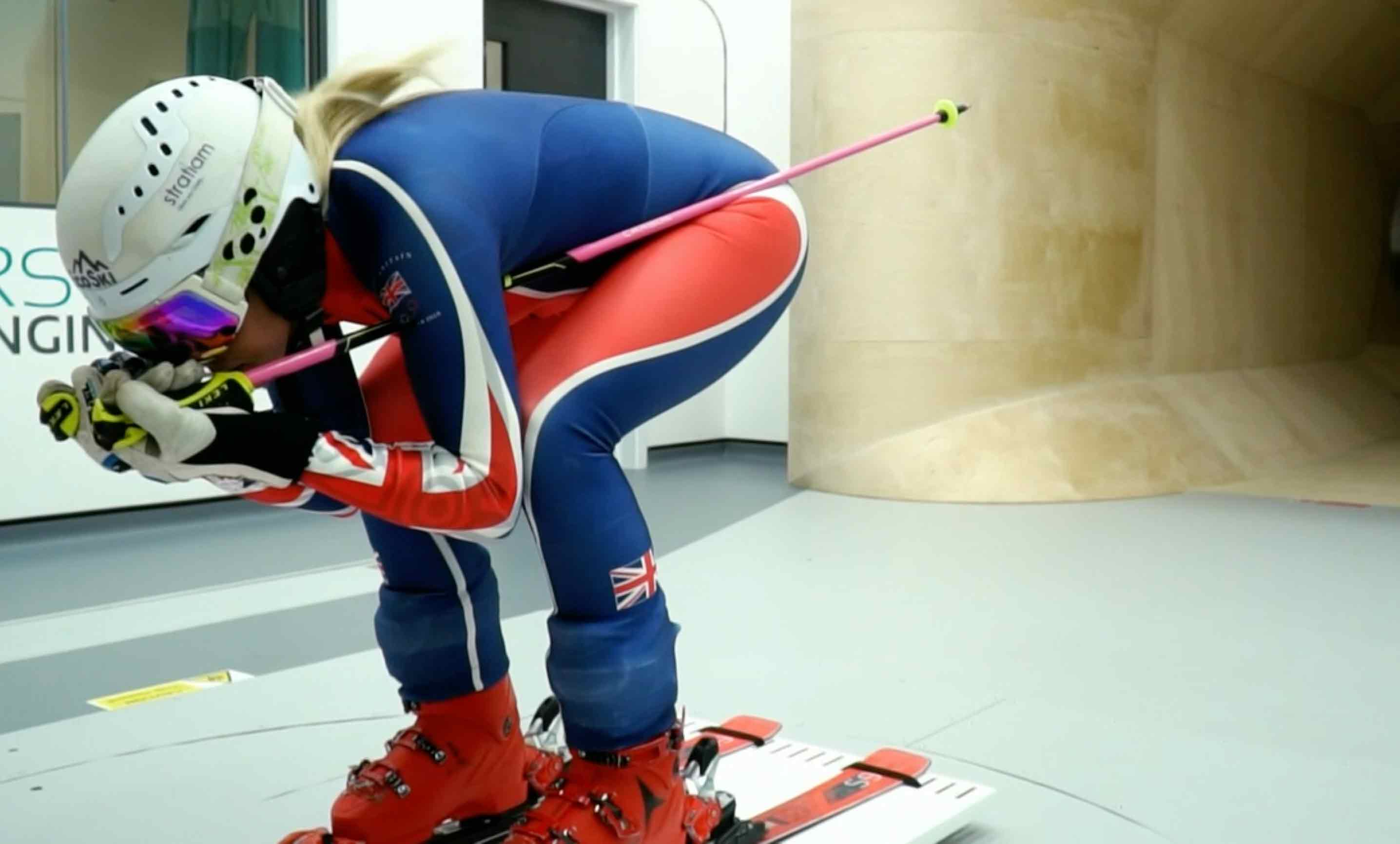 It's an age-old saying that tiny steps can add up to a massive overall improvements. This is equally true in sport - just as it is in business.

Before the latest round of covid lockdowns we went to Silverstone’s 'Sports Engineering Hub’ where they have a state-of-the-art wind tunnel.  Assisting us was 4X winter olympian and Ski Sunday presenter; Chemmy Alcott. Chemmy knows huge amounts about both wind tunnel testing and also how to monitor incremental variable changes, for marginal gains, one step at a time, both from her Olympic days and current role as instructor, trainer and mentor to our upcoming ski champions.

We decided to put some of our marginal gains / incrementality testing theories into practice. And the results blew us away (excuse the pun).

Silverstone sports hub, being based just outside Milton Keynes, couldn't be further away from the alps. But it is the perfect place for detailed aerodynamic testing. They have an extremely competent and helpful team ready to test and iterate through all your experimental conditions with you. Aerodynamic testing can apply to cycling, pushchairs, display stands or parasols. You name it - there are so many applications where this study is relevant. And anything within a certain size can be tested at Silverstone. Their facility is only about a year old and the wind tunnel is a beautiful, huge, and elegantly-crafted wooden structure with great viewing platforms on either side. We were the first people ever to conduct an aerodynamic study there related to skiing, and the results from which also got a mention in last night’s Ski Sunday on the BBC.

So how do you measure aerodynamics in a wind tunnel?

Aerodynamics is the study of how gases interact with moving bodies. Because the gas that we encounter most is air, aerodynamics is primarily concerned with the forces of drag and lift, which are caused by air passing over and around solid bodies.

Seeing as skiers don’t actually fly, we were primarily concerned with measuring drag, aka ‘wind resistance’, under the different conditions that a skier might expose themselves to. For example, different body positions, clothing, equipment types and so on... Since the higher the drag, the slower the skier will go.

What metrics did you use?

A commonly used metric in wind tunnels is the “CdA”. The "CdA" (coefficient of drag times frontal surface area) quantifies how "aero" the skier is. Simply put, the lower your CdA, the more aero you are. The CdA is also a great comparative metric since it also allows you to undertake fair comparisons against different people, sizes, heights and so on… how ‘aero’ they are is wrapped up in the CdA.

Consider four different shaped objects. A flat plate, a sphere, an ovoid and lastly a super-aero tear-dropped shape. The flat plat, blocks all the oncoming wind, has dreadful buffeting around its sides and poor laminar qualities.  Just by converting this shape into a sphere you can half your CdA / and corresponding wind resistance. The ovoid takes this down dramatically to 15% of the flat plate, and then the streamlined aero shape is only 5% of the flat plate.

If we imagine the flat plat as your typical tourist skier. Then our goal with Chemmy was to get her aero profile as close as humanly possible to the aero / streamlined shape.

What did you test?

How did you record results?

Silverstone’s 'Sports Engineering Hub’ have a sophisticated recording set-up, ready to calibrate and then record CdA for a given athlete’s ‘run’ in the tunnel. This logs multiple readings over fractions of a second. Then from hundreds of readings, it is able to take the average and best scores. For additional logging we also measured the output results on a whiteboard along with experiment notes. This enabled us to be agile with the wind-resistance results as they came through, so we were also interrogating new ideas against known results in a constantly evolving experimental way. So our day’s total results were part-planned and part-experimented-upon during the day.

The test skis were bolted to the floor, so for each run in the tunnel the set-up was exactly the same, bar the change to position or equipment used.

Working alongside a whiteboard allowed us to be agile and test new things on the fly, as results came through. Our aggregated log results were also loaded into Stratiam.

What were the key findings?

Testing for incremental improvements, or marginal gains, as in testing a single variable, in isolation from other variables, one at a time. Is a marvellous way to improve anything. Just as it was for improving Chemmy and Peter’s total CdA (coefficient of drag * area).

Huge gains were achieved by stepping away from the typical tourist skier’s stance, into the ‘tuck’ position (not an easy thing to do correctly), wearing a ‘cat suit’ provided exceptional aero qualities as did our aero helmet. Poles, pole angle, hair tucked-in vs out - also had significant benefits to the aero profile.

The whiteboard we’d updated during the day was probably the simplest way to visualise this data. But as we like to think Stratiam is pretty good at data viz, we thought we’d put together some supporting charts below.

The above chart shows a quick visual thumbnail, representing the body position and equipment setup Chemmy used alongside the CdA. Which is arguably a better way of displaying the data than via a simple bar chart. And the following chart, below, shows how each of the factors contributed, in terms of 'step change' towards the aero improvements. The next style of chart is commonly referred to as a 'waterfall chart':

Once we've got a detailed handle on each element's impact on CdA improvements we can also visualise this as 'part of a whole'. Using a pictorial chart. Obviously a skier works well here. This composition style chart is potentially useful to a skier looking to improve their aero characteristics in a proportionate way. Say for example if they had a limited budget to spend on aero equipment, they could get massive bang-for-their-buck on a change to their clothing. Wheres the expensive bendy poles might not be a priority.

Not only did we run an aerodynamic study for Chemmy Alcott. We also had our very own CEO, and skier, Peter Job, re-creating the tuck positions in cat suit. So we can compare improvements for both 'athletes' in the wind tunnel.

Peter Job vs Chemmy Alcott. Click on the chart lables to compare. Note Chemmy's readings were all better but Peter had greater ‘improvements’ following Chemmy’s coaching!

Following our study in the wind tunnel - the BBC (also with Chemmy Alcott) conducted their own experiment on a 250m straight-line vertical slope at Laax in Switzerland. Courtesy of the BBC we've re-displayed the performance stats alongside a thumbnail of Chemmy's configuration for the corresponding readings.

This enabled us to correlate both the lab 'CdA' (aka Wind Tunnel) data with the field 'speed' (aka straight-line vertical slope) data. Chemmy didn't record on the straight-line vertical slope with the full aero set up (i.e. Darth Vader style helmet) and aero boots. And probably for good reason, since our CdA recordings (from the wind tunnel) suggest she could nudge over 100mph, if some more CdA was eeked out. Which could have made the BBC production team pretty nervous for her safety!

Correlation charts can indicate something of a 'line of best fit' through your data points. This can allow you to predict what the cost of an expensive CdA setup might have on overall speed, for example.